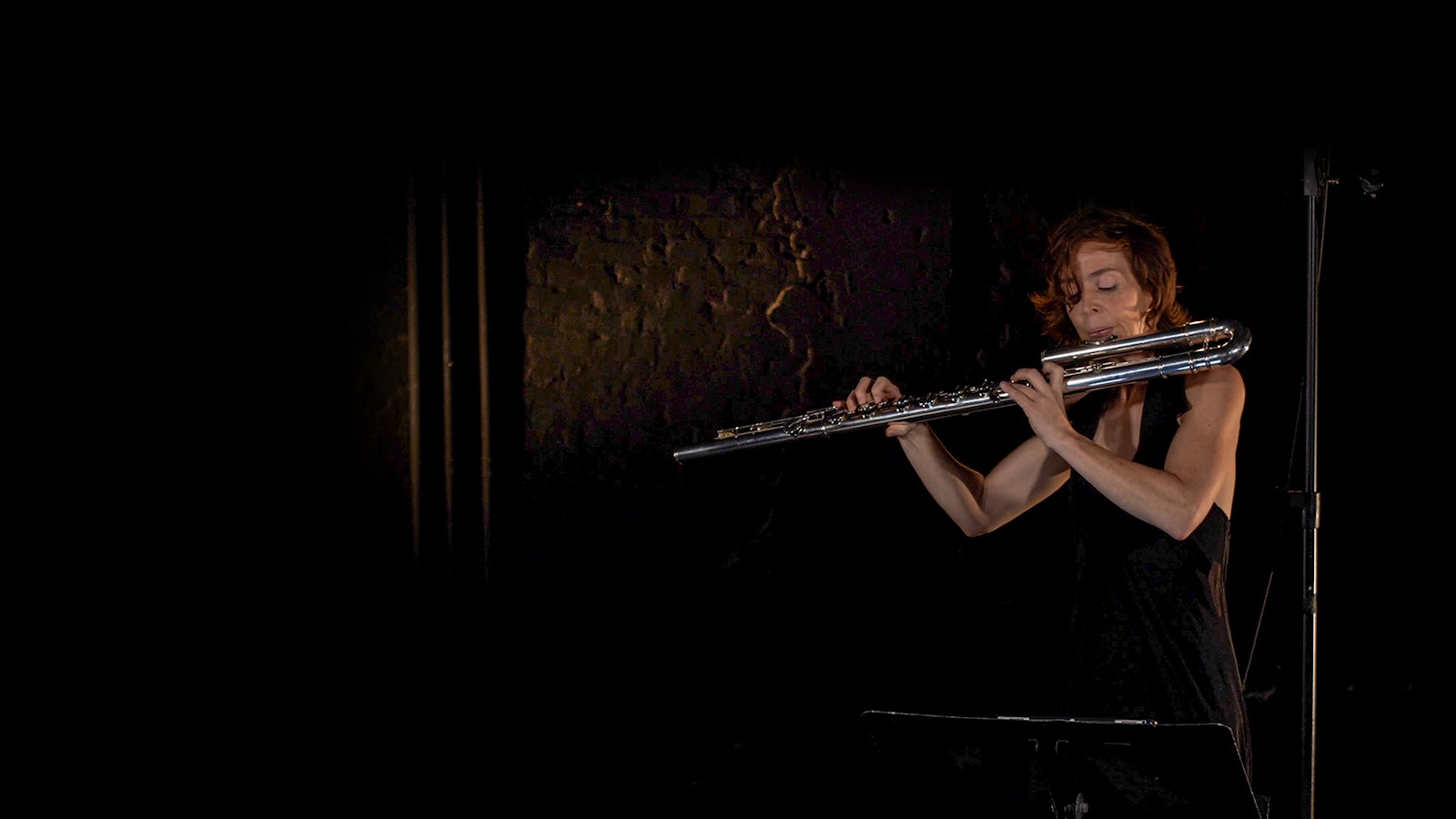 When Claire Chase’s flute teacher first introduced her to Density 21.5, the 1936 flute solo by Edgard Varèse that would change her life, he issued two instructions. One was: Don’t judge. He had noted her bewilderment at seeing the score, two pages devoid of the flurries and runs that normally signaled a virtuosic flute piece. His other instruction was more like a warning: “Okay, kiddo. Stand back.”

In a video interview from her apartment in Cambridge, MA, Chase, now 43, recalled the visceral reaction she had as a teenager when she first heard Varèse’s back-to-the-future flute monodrama with its percussive clicks, siren wails, and modal incantations. “It blew the roof off of my musical imagination,” she said. “And he was right, I needed to stand back—it shook every bone in my body.”

Today Chase is one of the most charismatic and fierce champions of her instrument and its ability to seduce, dazzle—and stun. The recipient of a MacArthur Fellowship and a professor at Harvard University, she was a co-founder of the International Contemporary Ensemble, now a defining force in the American new-music scene, and recently joined the brain trust of Collaborative Partners advising the San Francisco Symphony. But showcasing the solo flute remains at the heart of her career. She is not quite halfway into a twenty-four-year project designed to push the boundaries of flute music just as Varèse had done with his Density. By the time she is finished, in 2036, she expects to have commissioned twenty-four hours of new solo flute music, which she plans to perform in a single marathon session.

That music is channeled through all members of the flute family, from clay ocarinas that fit into the palm of a hand to the six-foot tall contrabass flute, from which Chase coaxes sounds ranging from cavernous shudders to the softest intimation of a whisper. Working with composers including Marcos Balter, Dai Fujikura, and Du Yun, Chase constantly adds new colors to the expressive palettes of her instruments. Sometimes she whispers into the mouthpiece or vocalizes one note while playing another. Key clicks develop a language of their own. Sounds fluctuate with changes in the intensity or direction of the breath so that a phrase of gleaming lyricism can pale on a dime, evoking ancient flutes made out of bone, bamboo, or clay.

Chase said that this is what made her fall in love with the Varèse in the first place. Even the most avant-garde composition for flute retains a connection to the instrument’s prehistoric roots, a witness to “the earliest humans carving something out of the bone of an animal and hurling their innermost desires and hopes, grief and rage and divinity through this little tiny bore.”

A few years ago, a friend gave her a gift of a 5,000-year-old ocarina from Ecuador that had made its way into a private collection. “My first instinct was, I don’t have the right to play it,” Chase said. “I needed to figure out where it belonged and to return it.” As it happened, she entered a collaboration with the Ecuadorian-Canadian anthropologist Eduardo Kohn and the Sápara Nation leader Manari Ushigua, who are tending to the cultural roots of the indigenous Sápara people in the Ecuadorian Amazon. On a Zoom call, one day in the midst of the pandemic, Chase showed them the ocarina, which was not much bigger than her thumb. They recognized it as an artifact of the Ecuadorian Amazon and encouraged her to play it. When she raised it to her lips, she said, it was as if the in-strument was playing itself. “I was able to sustain a high clear tone for what felt like over a minute,” she said. “I felt like I had a third or a fourth lung.” Chase will travel to Ecuador in 2022 to play with musicians in the Sápara Nation and to give the ocarina to a local museum of indigenous musical instruments.

For Chase, making music is in part an alchemical process in which breath trans-forms matter. Playing the Varèse on a flute made of platinum—the title refers to that metal’s molecular density—she said “you can feel the instrument soften in your hand” from the amount of air forced through it. Of all the wind instruments, Chase said, the flute is one of the most unmediated vehicles for expression. “Because we don’t have a reed, there is very little separating the breath—and you might say the soul—of a player from the sound that is made. You can tell when someone is being honest.”

Bringing honesty into the production of concerts was one of her goals in helping found International Contemporary Ensemble. She describes her work with that ensemble (which she now only occasionally advises) as community organizing. From the get-go they put artists in charge and committed itself to the music of living composers, often those working, as she put it, on the “fissures of disciplines.” “That was the fire in our bellies,” she said, “to create the kind of community that would be the antithesis of the orchestral model.”

That may be one reason that spurred San Francisco Symphony Music Director Esa-Pekka Salonen to enlist her help in reinvigorating the very institution she had spent much of her career rejecting. As a listener and performer, Chase said, she relishes orchestral music. She fell in love with the flute as a three-year-old attending a symphony concert with her parents in San Diego, looking down on a “sea of penguins” and being entranced by the light glancing off of a flute. But she is also uncomfortable with the legacy of an institution that has historically centered white European music.

Still, rather than calling for quick fixes or a torching of the classical canon, Chase invokes the need for the same qualities that sustain her commissioning project of solo flute music: stamina, a long breath, and the embrace of potentially uncomfortable silences. “I think that the urgency that often metabolizes into a quick fix needs to be redirected into an urgency of listening and of a deep, long, and ongoing commitment to change,” she said. She expects that work to take decades, perhaps centuries. “Because the orchestral institution is this behemoth, it is uniquely positioned,” she said. “It needs to ask, who do we want to be in 200, 300 years from now? That is the responsibility: a vision that is at least as long as the history of the institution.”

That vision could also include a redesign of the leadership structure of an orchestra. “There are so many ways that 100 people can organize themselves musically,” Chase said, “ways that have reciprocity and mutuality as well as contrast and surprise—all the things that we love in music.” And, harking back to the distant past once more, she sees inspiration in the ancient Greek “orchestra,” which denoted not a group of people but a space designed for dancing. “What if the orchestra of the future could be conceived of as a space that houses not only groups of people who play music and carry on traditions, but also conceived of as an open space that is metaphorically a dancing place—a place for radical reinvention, reimagination, cultural and stylistic multiplicity, and celebration?” she asked. “For a symphony orchestra to become an agent of that kind of transformation for and with the inhabitants of a city—for us to really be of service to one another in this way—I believe this is the work we’re called to do."