Playing the orchestra’s smallest instrument can be a thrilling high-wire act but SFS Piccolo Catherine Payne relishes the challenge.

Ask Cathy Payne what’s the best thing about being the piccolo player in the San Francisco Symphony, and the words flow out, like a gorgeous piccolo solo.

“You’re part of this incredible machine, where everything fits together, precise yet expressive and flexible. I’ve loved it ever since I played in a high school youth orchestra; I was just hooked.”

The piccolo is the smallest instrument in the orchestra but it plays the highest notes and has a lot of power. “I love being a solo voice, floating over the orchestra. The piccolo has an unfair reputation for only being shrill and high, but in the right hands it can be soulful, tender, and so lyrical. Or, it can be used to evoke power, anger, and terror. Helping to create those different moods in the orchestra is exciting for me.”

Not that being the lone piccolo player is always a piece of cake. For example, in Beethoven’s Fifth Symphony, there’s a famous piccolo flourish, a blur of notes riding atop the rest of the orchestra…in the last movement. “A lot of my career is spent waiting to make my entrance. In the Fifth, I sit for about forty minutes. But I’m not bored, because I’m listening to my colleagues.”

Performances aside, Cathy is equally passionate about teaching, at San Jose State, San Francisco Conservatory of Music Pre-College division, and as a coach with the SFS Youth Orchestra. “As I get older, I feel more and more that teaching is the most rewarding aspect of my life as a musician. It can have such an impact on a young person’s life, even if they’re going into another field. There’s nothing more satisfying than helping a student to unlock his or her creative potential, to see them build confidence; to hear them express themselves through their instrument more musically; to see them find joy in the instrument. That’s as good as it gets.”

Cathy also enjoys the Symphony’s Music for Families concerts, which bring parents and young children together for entertainment and inspiration. The pre-concert petting zoos, where children line up to try an instrument with a member of the SFS, have become a favorite for kids. “They get to hold an instrument for the first time, and they’re so excited to try it. They push the keys down, and try to make a sound. It’s a kick to work with kids that age.”

She has a lot of practice, thanks to her three-year-old son Sam. “He has his own CD player, and a little flute and violin. He bangs on the piano, and he loves to sing. Growing up in a house full of music is a great way to start out in life.”

Cathy’s passion about teaching may stem from a key moment from her college days. “I had a double degree: English and flute performance. But I was afraid I wouldn’t make it as a flutist, and had settled on publishing as a career. Then Gloria Steinem, one of my great heroes, spoke at graduation. She told us, ‘You’ll never be as free again as you are now. If there’s anything you want to do, do it now. If you fail, at least you tried.’ That made a huge difference to me. I ditched the publishing interviews and got work as a temp secretary (I was terrible). But every night I went home and practiced, and within a year I was able to support myself as a musician. I never imagined, listening to Gloria Steinem at commencement, that I’d wind up in the San Francisco Symphony, one of the world’s greatest orchestras. I’ve been here twenty-three years, and it’s still a thrill!” 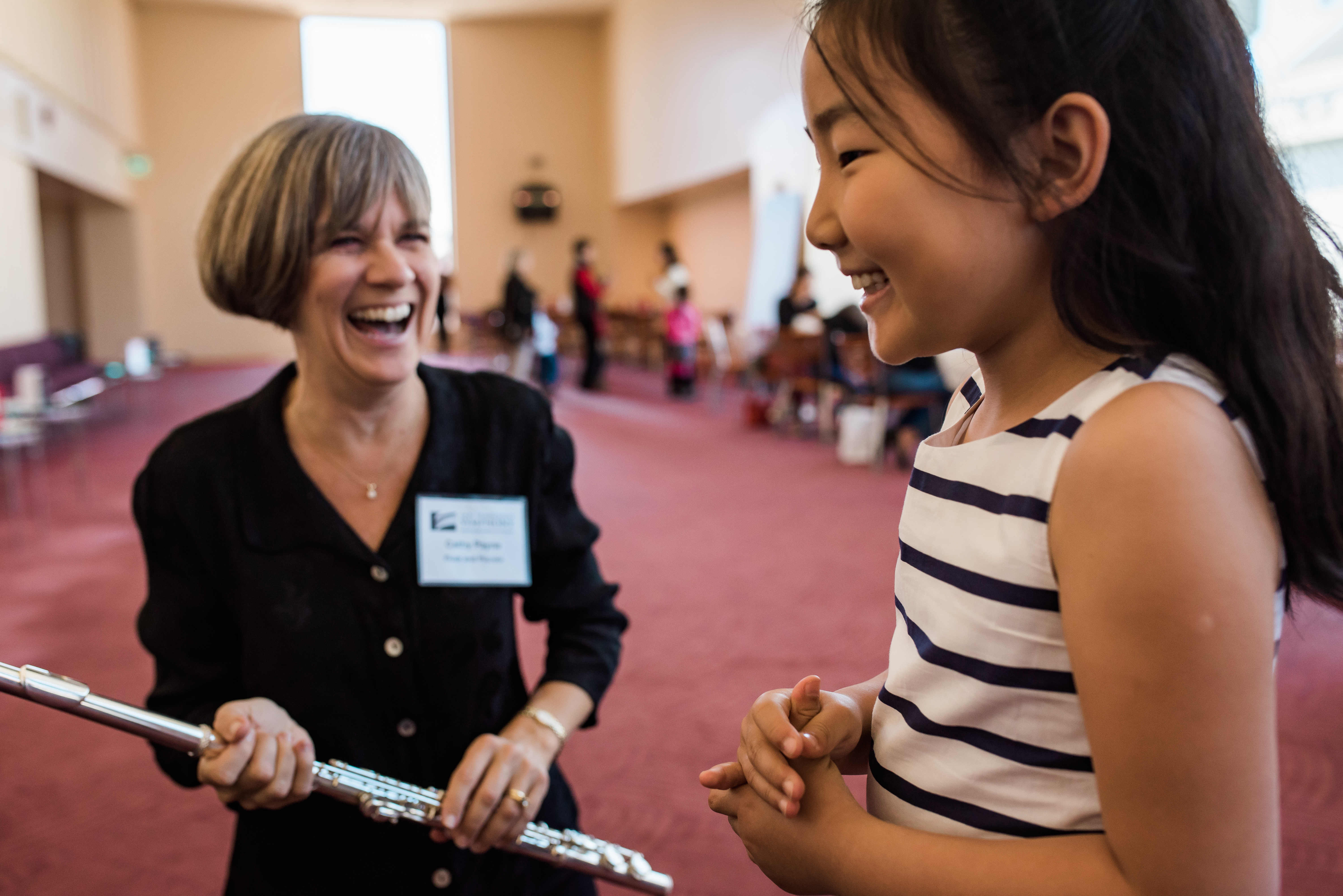