In the Moment: Violinist Randall Goosby 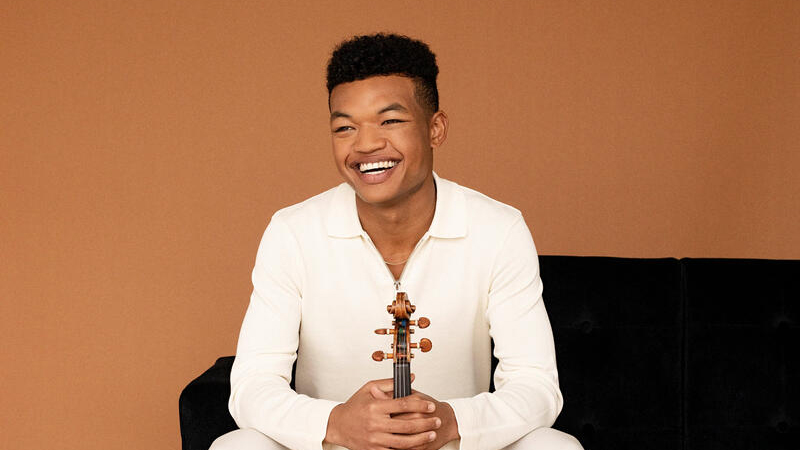 Violinist Randall Goosby makes his first appearance at Davies Symphony Hall on April 13 in a recital with pianist Zhu Wang as part of the Spotlight Series. He returns in September for his debut performance with Esa-Pekka Salonen and the San Francisco Symphony, performing Florence Price’s Violin Concerto No. 2. Goosby spoke to us about the value of artistic partnerships and the importance of being yourself onstage.

Dvořák [Sonatina for Violin and Piano] and Still [Suite for Violin and Piano] were on my debut album, Roots, released last year. I’m trying to find ways to weave that music into slightly broader programs. So, I added Grieg who, similarly to Dvořák, is inspired by indigenous musical sources. Each movement of the Still is dedicated to a sculpture that came out of the Harlem Renaissance. I wanted to look at how the different ways these composers looked at the world was reflected in their music.

Why is it important for you to feature music from composers such as Still, who’s very prolific, but perhaps not as familiar as Dvořák and Grieg?

It’s because they are lesser known that I try to infuse some of their music into whatever programs that I play, which is why I enjoy recitals so much. It’s such a nice and intimate way to let people into these different musical and sound worlds. And to show people that the classical music canon is not complete, far from it. In fact, William Grant Still was just one of countless other names that are either recently rediscovered or even yet to be discovered. That’s why Roots was such a wonderful project for me, especially during the times that we’re in, and that we were in when I was creating it. I’m hoping to continue along these lines, not just limiting myself to the music of Black composers, but Asian composers, Native American composers, female composers; music that’s not necessarily new, but music that’s certainly worth our attention and just hasn’t gotten it.

Tell us about your recital partner, pianist Zhu Wang.

We met at Juilliard a few years ago. I was enthralled with his playing. After one master class, I went up to him and said, “Hey man, I just won the YCA [Young Concert Artists] auditions; I’ve got a lot of recitals coming up next season. Do you want to play with me?” And he had no idea who I was, and he sort of looked at me with a smile and said, “Yeah, sure, let’s do it!” And the rest is history. It’s just been a really fulfilling experience for both of us; being able to have someone who you’re close to, and whose playing just frees you up that much more on stage to do things neither of you have ever done before, and do things that are inspired purely by the moment and by the emotions. I think the audience always appreciates that.

You started performing at a very young age. I understand you didn’t like the “P word” [for “prodigy”].

[Laughs] I’ve always been a low-key, under-the-radar kind of person. And so when that word started to get thrown around, I was kind of uncomfortable with it. So, my parents and I started calling it the “P word.” Maybe it had something to do with some sort of subconscious pressure, but I always believed, and still do, that I was just a normal kid who happened to enjoy practicing the violin for a few hours a day. It took me until a couple years into high school to realize, okay, this is actually something that I want to carry through the rest of my life and make into a career. I still bring the same sort of childish, naïve passion to it. I don’t care about where I am in ten years; what I’m doing right now is the most fun thing I’ve ever done in my life, and I don’t ever want to stop doing it.

You’ve studied with the great Itzhak Perlman, who’s been something of a mentor for you. What’s that like?

Ever since the first day I met him, he has broken down all the walls and barriers that I thought were there when you’re meeting an icon. He was one of the first people to ask me at a young age, when everyone’s sort of worried about technique and making sure everything’s in the right place: “Well, what do you think about the music? What does this make you feel, what are you trying to communicate?” Because at the end of the day, you can have the best technique in the world, and if you can’t answer that question, what are you doing? I harken back to that almost every day, when I’m practicing and getting caught up in all the details. I consider him both a mentor and a friend. We can talk about music, or sports, or food, all in the course of that one-hour lesson. It’s a really cool relationship, and I’m just so grateful to have someone of that caliber in my corner.

How do you prepare yourself mentally, when you’re about to go on stage?

One of my mantras is not to take myself or anything that I do too seriously. Some people might take that the wrong way, but to me, it’s all part of the fun. If you get yourself hyped up and nervous and shaky before a performance, at least for me, it’s translated to a less comfortable and less pleasant performance experience. If you’re comfortable, the audience is comfortable; they can open up, let their guard down, and enjoy. I try to just get into my most honest, most human self before a performance. I usually perform on the weekends, so I might stream a PGA Tour tournament in the dressing room, or talk to my parents on FaceTime. Just trying to stay connected with who I am, and let that person do the talking on the stage.   STEVE HOLT is a Contributing Writer to the San Francisco Symphony program book.