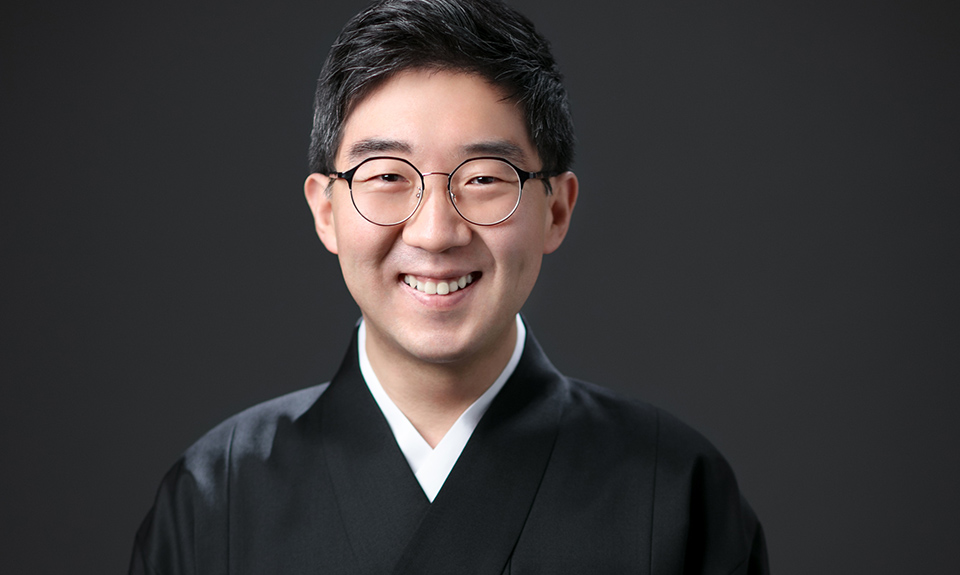 The music of Texu Kim figures on San Francisco Symphony programs for the first time this month: Spin-Flip is heard at the February 5 Lunar New Year: Year of the Tiger concert while Bounce!! receives its West Coast premiere in the concerts of February 10–12.

This is the first time your music is being performed by the San Francisco Symphony, and marks the West Coast premiere of your work Bounce!!. How would you introduce your work to someone who’s never heard it before?
I find I have two recurring topics in my music: One is the influence that our everyday experiences have on what we create. And I combine that with my collective memories of South Korea, where I was born. There, I didn’t really identify much as a Korean composer, because, well, in Korea, everyone is Korean! I was focused on mastering my Western classical composition skills. But when I came to the US in 2011 for my doctoral studies at Indiana University, I was a little shocked that everyone was very comfortable talking about their cultural or national background and how it inspired their music. So, I began thinking about what my music is about. Also, as a newcomer, I needed to communicate with everyone as much as possible. That’s where my interest in everyday life came in; I thought it would be a great way to communicate with anyone in the world. I looked for something very universal, like sports or food, as my inspiration. Then, after a few years I began looking for what’s unique in my music or me. I am obsessive about being different. I realized that I shouldn’t abandon all my experiences and memories from South Korea, because they’re a big part of me. That empowered me to have a more distinctive voice among so many great composers.

Can you give me an example of using a bit of everyday life in your music?
I’ve used Korean lullabies in some of my pieces. But I’ve also written music inspired indirectly by food. In Korea, there’s a snack called mochi [also known as chapssaltteok in Korean], a rice cake. When I was a teenager, there were still street vendors who walked around town, chanting a specific song about their mochi. It just says “mochi and buckwheat jelly.” [Sings] It’s that simple. I’ve quoted it in my music.

You also have quite a serious background in chemistry. Does that have any relationship to your music?
Yes and no. I was a child prodigy in chemistry; in high school, I was the Korean national representative for the International Chemistry Olympiad. I don’t brag about my musical career, but that was my big triumph. It gave me a full ride to study chemistry in college. I still love what I learned about it, but I love music a little more. I couldn’t think of a good career path in chemistry, but I couldn’t not think about music at any moment. So, I thought I should give it a shot.

And we’re all glad that you did! But is there any connection for you between the two fields?
Early in my music career I was a little shy about my chemistry background; it made me feel like I’m not experienced enough in music. But chemistry is basically mixing things to create a new item. And that’s a very important concept in music as well: for example, in motivic development and thematic variations. You compose a musical idea into a smaller essence, and then recompose to create something bigger. That’s exactly what chemists do in their labs.

Sometimes the musical chemistry is a kind of stylistic amalgamation. We are influenced by so many different styles; rather than struggling to come up with something completely new, if you combine or synthesize different styles in different ratios, then you can get something new. I’ve been doing that with jazz, classical music, avant-garde music, pop music, Korean traditional music, and any sound you can experience. Because I don’t want to duplicate myself, the ratios and the elements are different all the time. That is a big part of composition, when I sit down and try to find what a piece is made of.

Where does the title Bounce!! come from?
In 2013, at Indiana University, I went to the gym in the summer, every day. Of course, basketball is huge there. The court is on the first floor, and the gym was in the basement. So, whether or not I liked it, every day I encountered the sounds of basketball twice, going in and coming out. I began thinking I should write something about that. Basketball itself is a little too specific, so I tried to extract some more general principles or concepts from the experience. “Bounce” is also a good umbrella term, a musical concept.

How hard was it to write Bounce!!?
It took more than six months, but I didn’t feel it as a struggle. I sketched it out like a piano score, two staves, just to see the pitches and rhythms, which took more than 70% of my composition time. (I was enjoying the luxury of having the time to go over and over until I felt everything was in the right place.) Once I felt I was done with the skeleton or the structure of the piece, the orchestration was also a lot of labor, but more physical labor rather than mental.

Will you be changing the orchestration from its original small ensemble setting, to take full advantage of the San Francisco Symphony?
I’m increasing the string parts, to make it work with the acoustics of Davies Symphony Hall. And we’ll probably tweak things a bit in rehearsal. I’m excited not just to have an orchestra perform the piece, but it’s the San Francisco Symphony!

I have to ask. Do you play basketball?
I learned how to play it. I’m not good at it!

STEVE HOLT is a Contributing Writer to the San Francisco Symphony program book.