Selections from Three Dances from The Three-Cornered Hat

With the San Francisco Symphony

Join us at Davies Symphony Hall for a vibrant celebration of Latin American music and culture at our annual Day of the Dead celebration! Festivities begin with a formal seated lunch and a silent auction. Arrive early for refreshments, live music, dancing, colorful altars, and folk art in the lobby. Then, a feast for your ears and eyes with a lively concert of traditional Latin folk music and genre-bending performances. Featuring acclaimed conductor Jacomo Bairos leading the award-winning fiddling and vocal ensemble The Villalobos Brothers along with the SF Symphony, this is an all-day party you won’t want to miss!

Celebration Lunch & Concert purchasers will be invited to a behind-the-scenes evening art installation tour of the Día de los Muertos art at Davies Symphony Hall. The Tuesday, October 23, 2018 tour concludes with a reception with the artists. 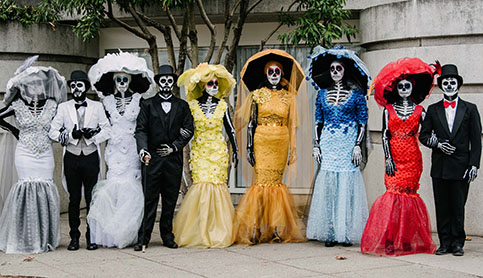 The Toccata and Fugue in D minor is perhaps the most famous of the many works by Johann Sebastian Bach (1685-1750). In addition to the famed transcription (known to most of us from Walt Disney’s Fantasia) by Leopold Stokowski, Bach’s work has served as the basis for any number of transformations over the years. In Sam Hyken’s Toccata y Fuga, a propulsive Latin rhythm section adds a contemporary spark to Bach’s classic piece.

In his short life, Silvestre Revueltas (1899-1940) staked an essential place in the currents of modernism emerging in his country. For much of his career, Revueltas would shuffle back and forth between the United States and Mexico. Revueltas composed his score for Chano Urueta’s film La noche de los Mayas (The Night of the Mayas) in 1939. Twenty years after the composer's death, his compatriot José Ives Limantour went through this score and edited portions of it to form the concert suite. Noche de jaranas (Night of Revelry) is the second movement of the suite.

Spanish composer Manuel de Falla y Matheu (1876-1946) was successful in balancing his work as a musical Impressionist without sacrificing the Spanish flavor that lay at the root of his inspiration. Among the Spanish-flavored stage works that flowed from his pen is the 1915 ballet El amor brujo (Love the Magician). El amor brujo contains among its many treasures a sizzling ritual dance that aims to draw the evil spirit of a dead faithless lover into a fire and hence to destruction. In Falla’s 1919 ballet The Three-Cornered Hat, a wild fiesta sets the stage for a series of dances, including one of the most difficult and athletic of all Spanish dances—the farruca. A jota concludes the ballet.

Ernesto Lecuona (1895-1963) was sometimes called the “Gershwin of Cuba.” Like Gershwin, Lecuona was at home in both popular and classical music and his many canciones skillfully mix Cuban folk sounds and popular song forms. His legacy lives on in his wide-ranging oeuvre, comprising many Cuban zarzuelas (light operas), close to 200 piano pieces, more than thirty orchestral scores, eleven film scores, and, of course, his more than 400 songs. Today Lecuona is perhaps most remembered for his fiery Malagueña, originally composed for piano. (A snappy rendition recorded by the composer can be found on YouTube.) The malagueña is a Spanish folk dance (originating in Málaga) similar to the fandango.  —Steven Ziegler