PRISCILLA B. GEESLIN ELECTED 18TH PRESIDENT OF THE SF SYMPHONY

SAN FRANCISCO, December 17, 2020—Sakurako (Sako) Fisher this month concluded her eight-year tenure as President of the San Francisco Symphony. In her role as President, Fisher presided over the Orchestra’s trajectory of artistic and financial growth, audience development initiatives, and significant leadership transitions. She nurtured and supported a culture of inclusion, transparency, and innovation, while strengthening organizational stability. Priscilla B. (Prisca) Geeslin has been elected to the Office of President and now assumes her role as the 18th President in the organization’s history.

In remarks at her final Annual Meeting as SF Symphony President, Sakurako Fisher said: “I have learned that even though there isn't an “I” in team, teams are built on the “I's,” like the ones in inspiration, integrity, initiative, and innovation. And I'm not even counting the “I's” in the word individuals! These are the “I's” that make a winning team. We see this in any successful venture, whether sports or business. And we also see it here at our own ONE San Francisco Symphony. The individual staff members, musicians, and Board members are all bringing their unique “I's” to our ONE San Francisco Symphony team. And we are all the better for it. These “I’s” will also be the inspiration and idea generation for all our ongoing work and the successes to come. Another thing I have learned and will also carry forward in my life is the work we have done here with diversity, equity, and inclusion. There are a lot of “I's” in those three words and for good reason—it is about being an organization of excellence, that can embrace all the variations of “I,” while still being a team. We talk about our excellence on stage, but we need to have excellence across all parts of our organization. No one part supersedes the others. And lastly, there is an “I” in Prisca. I could not be more thrilled and excited to have her following me, so I can join the ranks of my fellow past Presidents, at the back of the room. I believe that Prisca brings all the right attributes for this next phase of our growth, leading with her resilience, humility, and prodigious memory for music and people's names.”

“Over 25 years of volunteering at the Symphony, I have had the privilege of working side-by-side with Sako in a wide variety of capacities,” said incoming President Priscilla B. Geeslin. “Working with her this last year as President-Elect has opened my eyes even further to her many contributions to this vibrant institution; I look forward to continuing to collaborate with her as she remains an active member of the Board of Governors. The San Francisco Symphony is one of the Bay Area’s most important, creative, and forward-looking arts organizations, and I am honored to assume this leadership role as we chart the course for the Symphony’s future with Esa-Pekka Salonen and Mark Hanson.”

As President of the San Francisco Symphony, Sakurako Fisher oversaw significant artistic, audience, and operational growth for an orchestra that now presents more than 220 concerts each year at its home, Davies Symphony Hall, and around the world. Under her guidance, the Orchestra implemented a broad range of artistic, technological, and community-building initiatives that continue to place the San Francisco Symphony in the front ranks of the world’s most innovative and accessible orchestras. Working closely with the Board of Governors, administration, musicians of the Orchestra, and Music Director Michael Tilson Thomas, Fisher managed critical leadership transitions through the appointments of CEO Mark C. Hanson and Music Director Esa-Pekka Salonen; was instrumental in setting positive labor agreements with the talented musicians of the Orchestra; aided key administrative leadership appointments to strengthen organizational stability; and forged long-range financial plans that set the course for the Orchestra’s sustainable future. Her dedication to community service drove an expansion of education projects and community engagement activities. Committed to growing audiences and increasing diversity throughout all areas of the organization, Fisher expanded cultural heritage events and cross-constituent initiatives to guide inclusion and strengthen the organization’s culture of experimentation.

Sakurako Fisher was elected President of the San Francisco Symphony in December 2012 and has been a member of the Symphony’s Board of Governors since 1992. Fisher’s Board roles have included participation on committees governing Artistic Policy, Finance, Development, Governance, Instrument Acquisition, Labor Relations, Human Resources, and Education, among others. She has personally supported many aspects of the Orchestra’s key initiatives—including the Second Century Campaign, the Fisher Family AIM Fund supporting the Orchestra’s public school music education program Adventures in Music, and a wide variety of audience-building incubator initiatives, among them her foundational leadership of SoundBox, the Orchestra’s experimental music space. Fisher has also chaired many of the Symphony’s signature fundraising events, such as Opening Night Gala. Last season, Fisher oversaw a year-long celebration of Michael Tilson Thomas in his 25th and final season as Music Director. When the coronavirus pandemic canceled live performances in 2020, she guided the development of a one-of-a-kind 25-day online tribute to MTT, culminating in the virtual concert event MTT25: An American Icon.

CEO Mark C. Hanson: “In her role as President, Sako has continuously pushed us as an organization, overseeing a transformative arc of artistic organizational and community building initiatives that positioned the San Francisco Symphony as one of the most innovative, relevant, and accessible arts institutions in the world. Through her visionary leadership, Sako has nourished a culture of accountability and transparency at the Symphony, helping to break down silos and guiding us to function as one unified ecosystem.”

Music Director Esa-Pekka Salonen: “Sako embodies all the qualities and characters that I hoped the San Francisco Symphony, as an organization, would have. Things like curiosity, constant innovation, and vivid imagination. She has a respect for tradition and legacy, but not in a rigid conservative sense. Rather, she sees tradition as a living organic material. When I met Sako, I felt straightaway that this organization is somehow the perfect match for me.”

Principal Librarian and Co-Chair of the SFS Players’ Committee Margo Keiser: “So much has happened during the previous eight years that has required a Board President who could navigate a different course and it was her visionary support that was instrumental in launching our much-lauded SoundBox series. It was an endeavor that tested possibilities and its success is a testament to her perseverance and generosity.”

Music Director Laureate Michael Tilson Thomas: “Sako Fisher was Chair of the San Francisco Symphony Opening Night Gala during my first year as Music Director in 1995. Through the twenty-five momentous and wonderful years that followed, she has brought her great spirit and dedication to the San Francisco Symphony, and it has been my pleasure to work with her, especially in her eight years as President.”

Speaker of the House of Representatives Nancy Pelosi sent the following congratulatory video message from Washington, D.C.: “Sako, Paul and I are honored to call you a friend and have had the privilege of seeing, firsthand, your brilliant stewardship of the Symphony, and showing that it remains one of the finest orchestras in the world. Your passion for music and the arts has been an invaluable asset, helping expand the Symphony's reach to underserved communities. You have done this here and nationally, with your leadership of the Smithsonian Institution and the Kennedy Center. On behalf of Congress, I salute your commitment to making the arts available to all in our country. On behalf of the entire San Francisco community, I thank you for all that you've done to enrich our lives for so many years. We're grateful to Bill and your entire family, for sharing you with us for so long. We're excited to see what lies ahead for you. As we look toward the future, we're thrilled to welcome incoming President, Prisca Geeslin, who will proudly carry on Sako's legacy and ensure that this outstanding organization continues to grow and thrive for years to come. Congratulations to all.”

San Francisco Mayor London N. Breed issued a City proclamation declaring:
Whereas, the City and County of San Francisco traditionally recognizes individuals who have made significant and remarkable contributions to the vitality of our City, and the remarkable work of Sakurako Fisher truly represents San Francisco values at their best; and

Whereas, since 1992, Ms. Fisher has served as a dedicated member of the San Francisco Symphony’s Board of Governors; and

Whereas, in 2012 she was elected as the Symphony's President, beginning an eight-year tenure leading one of the Nation’s most acclaimed arts institutions; and

Whereas, through collaboration with the Board of Governors, administrative staff, and musicians of the Orchestra, Ms. Fisher oversaw key leadership transitions through the appointments of a new CEO and a new Music Director; and

Whereas, leading by example, Ms. Fisher has nurtured and supported a culture of inclusion, collaboration, and transparency at the Symphony; and

Whereas, Ms. Fisher continuously demonstrates her unwavering commitment to her community, leading expansions in the Orchestra's education projects and community engagement activities; and
Whereas, Ms. Fisher is an irreplaceable part of our City, and her countless accomplishments and service to our City deserve a grand celebration; now

About Sakurako Fisher
In addition to her significant roles with the San Francisco Symphony, Sakurako Fisher is also a trustee to Stanford University, where she recently became a member of the Stanford Alumni Association’s Board of Directors, and a presidential appointee to the Kennedy Center. Recent past chair of the National Board of the Smithsonian Institution, she served as co-chair of the organization’s first-ever campaign. Fisher has served as a trustee of the Thacher School in Ojai, CA, chairing development there, and has been vice-chair of the board of the Exploratorium Museum, where she chaired nominating. Twice chair of the board of ODC/San Francisco, she has also served on the boards of Stern Grove, Asian Art Museum Foundation, the American Hospital of Paris, American Hospital of Paris Foundation, Alliance Française, and the Centre Pompidou Foundation. She also sits on the US advisory board for the Musée des Arts Décoratifs in Paris. At Stanford University, she is on the advisory boards of the Department of Humanities and Sciences as well as the Freeman Spogli Institute for International Studies. Fisher was awarded Le Chevalier des Arts et Lettres medal from the French government. She previously worked as a grain merchant for Cargill, Inc. and a foreign exchange dealer for Citibank.

About Priscilla B. Geeslin
Priscilla B. “Prisca” Geeslin was elected President of the San Francisco Symphony in December 2020 and has been a member of the San Francisco Symphony Board of Governors since 1998.  She most recently served the SF Symphony as Vice-President of the Board of Governors, Vice-Chair of the Committee on Governors, and a member of board committees overseeing Development, Finance, Executive, and Artistic Policy. Geeslin’s twenty-five years of leadership and support include a deep commitment to the Orchestra’s education and community building programs, including the establishment of the Geeslin Family Fund for Community Engagement.  She has chaired some of the San Francisco Symphony’s most important fundraising events including Opening Gala and Deck the Hall. Geeslin currently serves on the boards of the American Conservatory Theater (Vice-Chair), Grace Cathedral, and NARAL Pro-Choice America Foundation (Board Chair).  She has also served on the boards of SFArtsED and the French American International School. Her husband, Keith Geeslin, is President of San Francisco Opera and Episcopal Community Services.

[To view the full PDF version of this press release, click the link at the top of the page]
Download a PDF of this Press Release 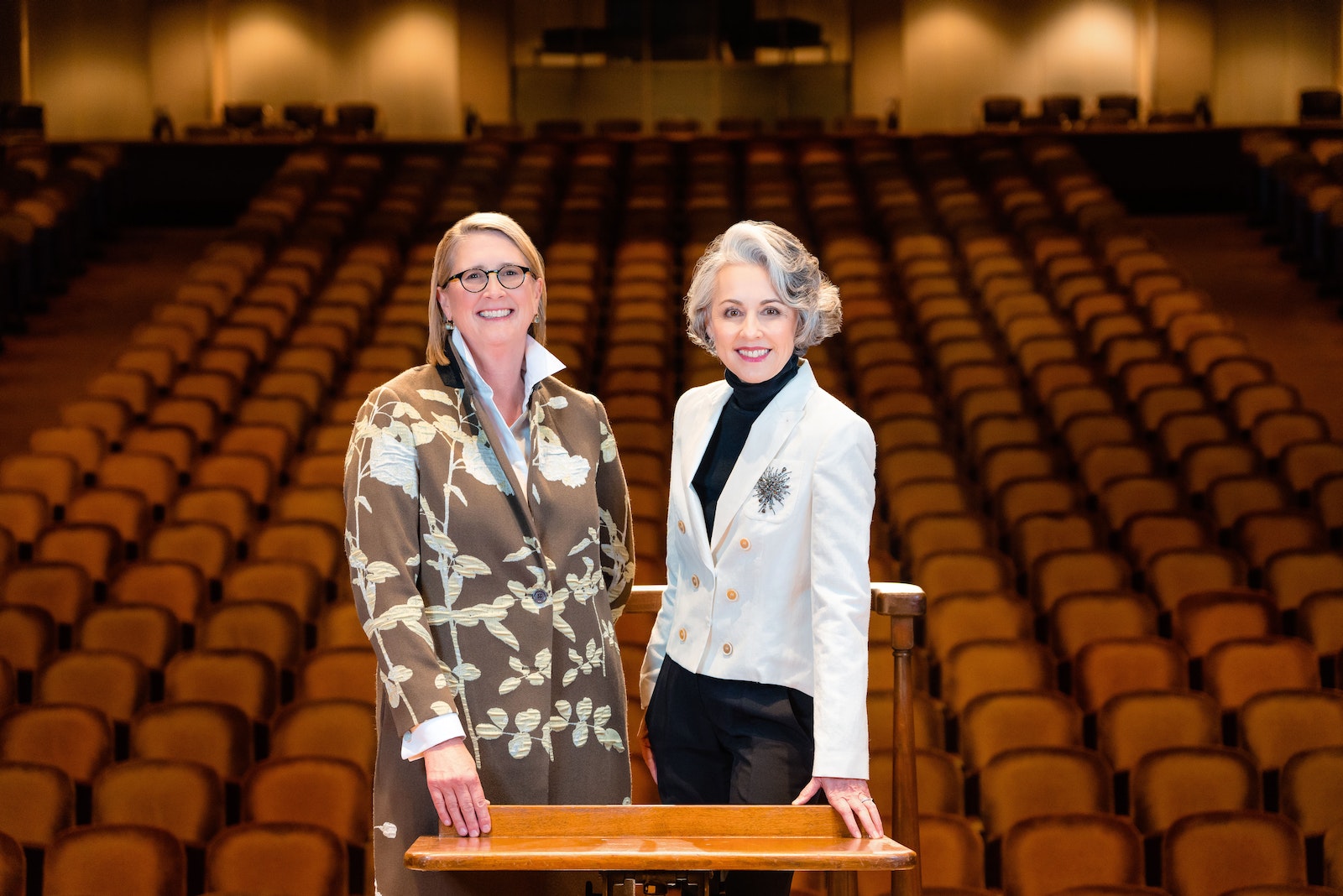