“By promoting Michael Tilson Thomas to the rank of Officer in the Ordre des Arts et des Lettres, France celebrates an immense artist, unanimously recognized by the Parisian public, who worked hard to promote French music composers in the United States.  As a universal language, music brings people together and MTT’s work shows the essential role of culture in the Franco-American friendship.”
- Emmanuel Lebrun-Damiens, Consul General of France, San Francisco

MTT has frequently visited and guest conducted the major French orchestras and has regularly appeared at the premier French concert halls both on tour with the San Francisco Symphony and with the London Symphony Orchestra, among others. He was scheduled to lead the San Francisco Symphony on tour in Lyon and Paris in April 2020; those performances were unfortunately canceled due to COVID-19. MTT's most recent appearance in France was conducting Orchestre de Paris, which he will return to conduct again in June 2021.

Click here for a selection of downloadable images from the ceremony.

The following are condensed excerpts from the remarks given at the ceremony:

Sakurako Fisher, President of the San Francisco Symphony
“On behalf of the San Francisco Symphony, I want to express my appreciation to Mayor Breed and Consul General Lebrun-Damiens for being here with us to acknowledge this incredible honor, which the French Minister of Culture has bestowed on our own Michael Tilson Thomas. The Officier des Arts and Letters recognizes people who have significantly furthered culture and the arts globally. And we at the San Francisco Symphony have been so fortunate to benefit from Michael's passion, artistry, and dedication to spreading the transformational power of music worldwide for a remarkable 25 years. . . . France holds a deeply meaningful place in my heart. It has been, and is still a home for me, and is a place that truly celebrates curiosity and creativity in the arts. No other city in the United States upholds the same values more than San Francisco. We thank the French Ministry of Culture for bestowing this great and well-deserved honor on our MTT on the occasion of the conclusion of his 25 years as Music Director of the San Francisco Symphony.”

Thomas E. Horn, President of the Board of Trustees, San Francisco War Memorial and Performing Arts Center
“Mayor Breed, Consul General, dear Michael, you have brought us such a joy for this last 25 years. I feel like we've been riding on a wave of beauty and of music under your leadership. You have educated us with Keeping Score. You have shown us nuances and insights into Mahler. You've refocused some of our attention on American music, American composers, and now you're training a whole new generation of artists and musicians with the New World Symphony. It is such a thrill for me to participate in this well-deserved honor of recognition by the Government of France—an acknowledgement that you so richly deserve having promoted French artists, French music, and French culture your entire career.”

London N. Breed, Mayor of the City of San Francisco
“Thank you everyone for being here today to celebrate someone who is absolutely incredible. I think about the fact that here in San Francisco, we've been able to have MTT give 25 years dedicated to the San Francisco Symphony, but also doing so much more for music in the entire world. We are so blessed and grateful for your service to San Francisco. What you have done has really put us on the map, but more importantly, what you have done has lifted our spirits with music. I know that the world is a more beautiful place because you are in it and because of what you have brought here. And again, I can't express how significant it is to have you as a part of San Francisco. Even though you have spent your 25 years at the Symphony and now you're stepping away somewhat, you're still going to be a part of our city. You're still going to be conducting here in San Francisco. You're still going to be working with the next generation of artists and conductors and musicians. And that is truly incredible.”

Emmanuel Lebrun-Damiens, Consul General of France, San Francisco
“It is truly an honor, and a great pleasure for me as the French Minister of Culture asked me to present Michael Tilson Thomas with the insignia of Officer in the Order of Arts and Letters. Maestro, you have been a Knight in this order for a long time and you know well the importance France gives this distinction. In the United States and beyond you have made a profound impact upon the lives of many. Through your talent and your personality, you have transmitted your passion to thousands of musicians and audiences.

We very much value the relationship that you and the San Francisco Symphony developed with France. The Mayor mentioned the concert after the fire at Notre-Dame, and we will never forget the solidarity you showed with Paris. The Symphony immediately proposed to perform in these concerts, by which San Francisco showed that Sister Cities are stronger together. You should have been performing in Lyon and Paris this spring, but sadly, these concerts could not take place because of the health crisis. But this award that France gives you today is an invitation to come back as often as possible to our country so that we can continue to share creative moments with you and enjoy your talent.

At the time when you prepare to leave the San Francisco Symphony after 25 fabulous years, we wish Joshua and you the very best. I will never forget the day when both of you welcomed me backstage [at Davies Symphony Hall] and I discovered that a conductor could be welcoming, talkative, and relaxed! Today, we are awarding the Arts and Letters to a dear friend. A friend of the arts, a friend of France. We are celebrating someone who has continually supported artistic exchanges, relentlessly expanding cultural horizons, and supporting new generations of musicians and music lovers. It is to express our admiration and recognition that we present you with the insignia of Officer in the Order of Arts and Letters, Michael Tilson Thomas.”
About Michael Tilson Thomas
Michael Tilson Thomas assumed his post as the San Francisco Symphony’s 11th Music Director in 1995, consolidating a relationship with the Orchestra that began with his debut here in 1974. In what is widely considered one of the most dynamic and productive partnerships in the orchestral world, Tilson Thomas and the SF Symphony have been praised for their innovative programming, enhancing the orchestral concert experience with multimedia and creative staging, showcasing the works of American composers, and attracting new audiences to orchestral music, both at home at Davies Symphony Hall and through the Orchestra’s extensive media projects. A Los Angeles native, he studied with John Crown and Ingolf Dahl at the University of Southern California, becoming Music Director of the Young Musicians Foundation Debut Orchestra at nineteen. He worked with Stravinsky, Boulez, Stockhausen, and Copland at the famed Monday Evening Concerts and was pianist and conductor for the Piatigorsky and Heifetz master classes. In 1969, Tilson Thomas was appointed Assistant Conductor of the Boston Symphony. Ten days later he came to international recognition, replacing Music Director William Steinberg in mid-concert at Lincoln Center. He went on to become the BSO’s Principal Guest Conductor, and he has also served as Music Director of the Buffalo Philharmonic, and as a Principal Guest Conductor of the Los Angeles Philharmonic. With the London Symphony Orchestra he has served as Principal Conductor and Principal Guest Conductor; he is currently Conductor Laureate. He is Artistic Director of the New World Symphony, America’s Orchestral Academy, which he co-founded in 1987. The NWS has helped launch the careers of more than 1,200 alumni worldwide, including more than 15 members of the SFS. Tilson Thomas’s recordings have won numerous international awards, including 12 Grammys, 11 for SFS recordings. In 2014, he inaugurated SoundBox, the San Francisco Symphony’s alternative performance space and eclectic live music series. His television credits include the New York Philharmonic Young People’s Concerts and in 2004 he and the SFS launched Keeping Score on PBS-TV. His compositions include From the Diary of Anne Frank; Shówa/Shoáh; settings of poems by Emily Dickinson, Walt Whitman, and Rainer Maria Rilke; Island Music; Notturno; and Four Preludes on Playthings of the Wind. Tilson Thomas is an Officer dans l’ordre des Arts et des Lettres of France, was Musical America’s Musician and Conductor of the Year, and was inducted into the Gramophone Hall of Fame. He has been elected to the American Academy of Arts and Sciences, the American Academy of Arts and Letters, was inducted in the California Hall of Fame, and was awarded the National Medal of Arts by President Obama. Most recently, he was named a 2019 recipient of the Kennedy Center Honors.

[To view the full PDF version of this press release, click the link at the top of the page] 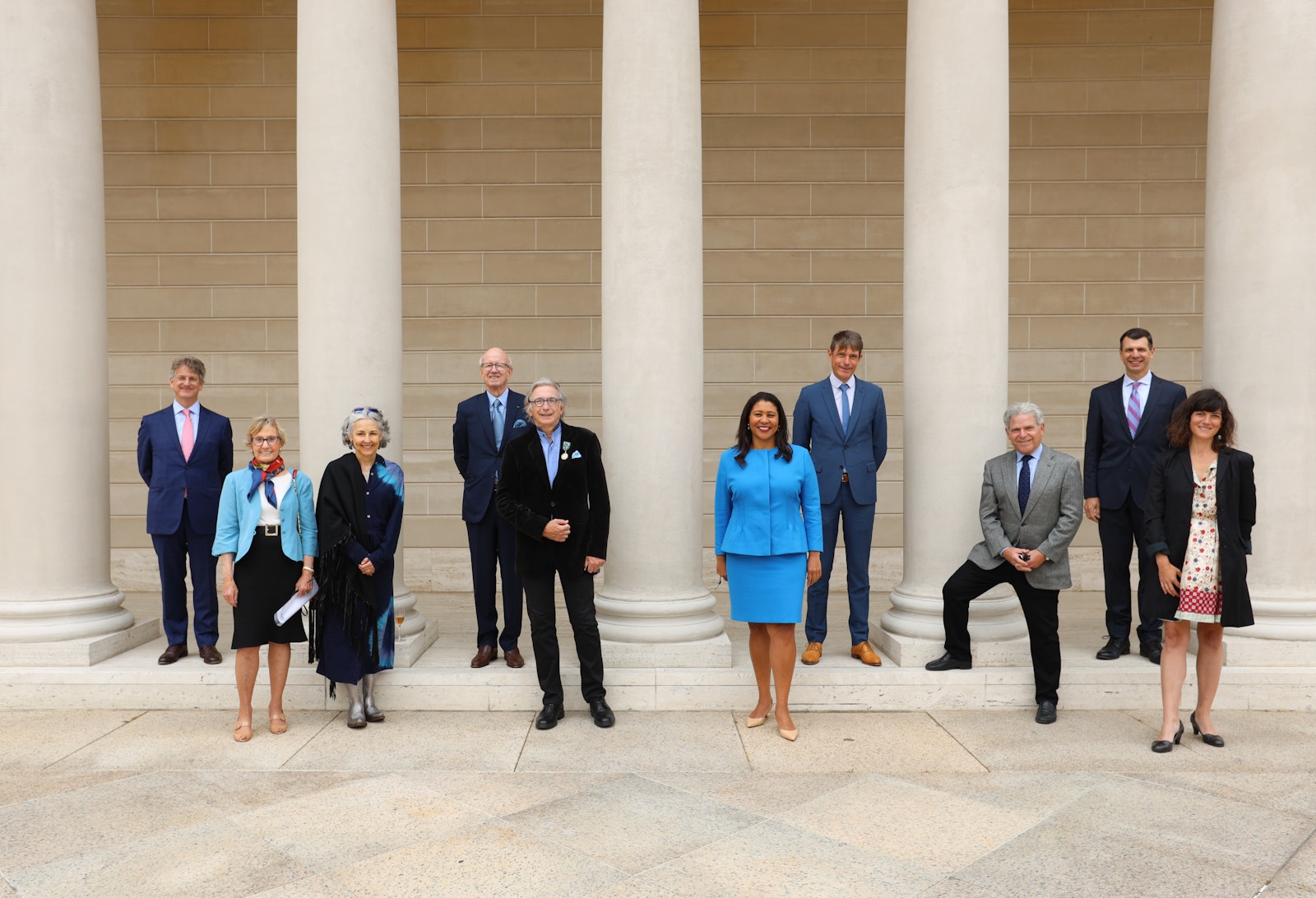