This concert is sponsored by Emirates Airline. 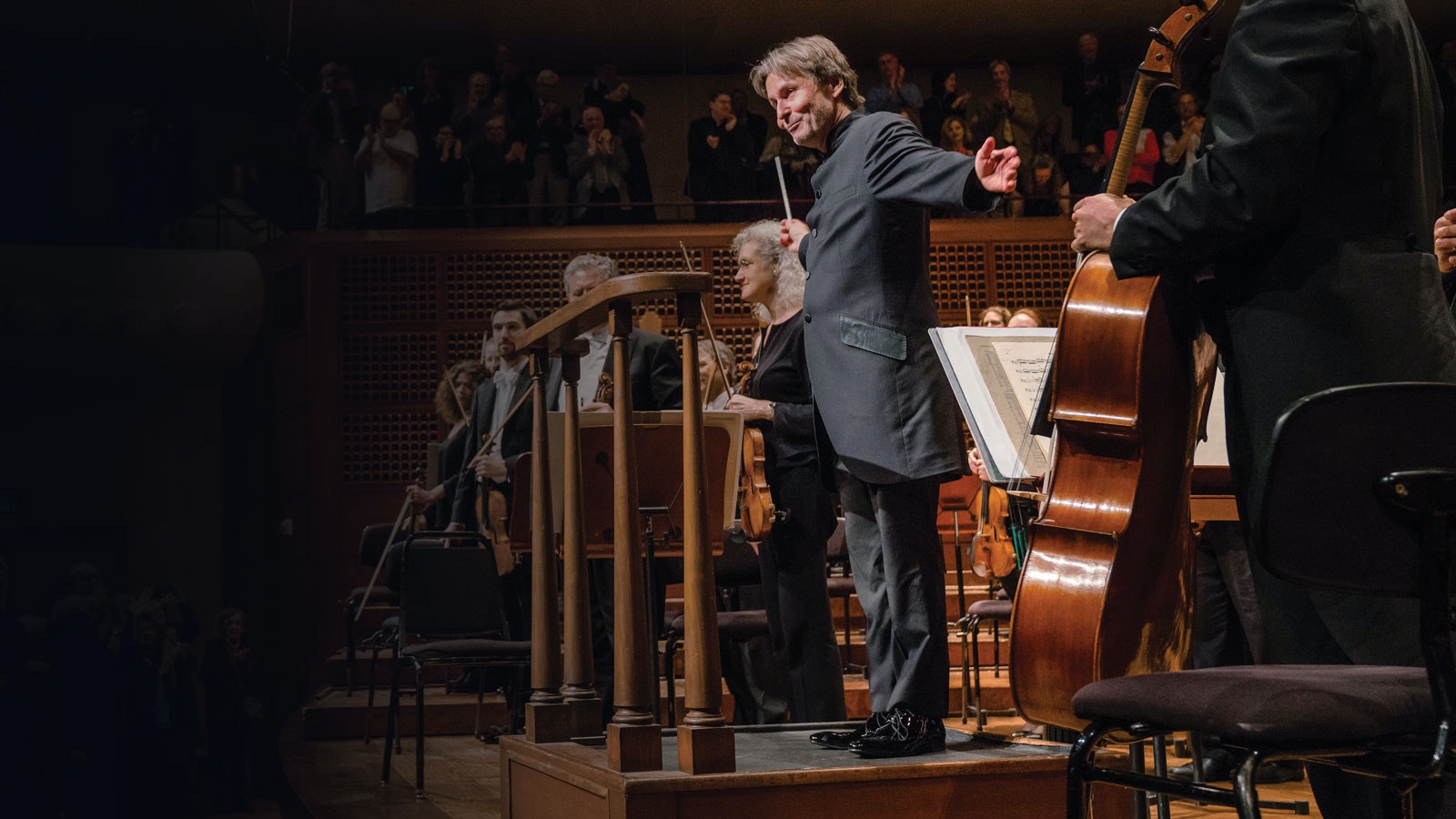 San Francisco Symphony Music Director Esa-Pekka Salonen has, through his many high-profile conducting roles and work as a leading composer, shaped a unique vision for the present and future of the contemporary symphony orchestra. Salonen is currently the Principal Conductor & Artistic Advisor for London’s Philharmonia Orchestra and is Artist in Association at the Finnish National Opera and Ballet. He is a member of the faculty of the Colburn School in Los Angeles, where he developed and directs the pre-professional Negaunee Conducting Program. Salonen is the Conductor Laureate for both the Swedish Radio Symphony Orchestra and the Los Angeles Philharmonic, where he was Music Director from 1992 until 2009. Salonen co-founded—and from 2003 until 2018 served as the Artistic Director for—the annual Baltic Sea Festival. Learn more about Esa-Pekka Salonen here.

Named Musical America’s 2018 Instrumentalist of the Year, Augustin Hadelich is consistently cited worldwide for his phenomenal technique, soulful approach, and insightful interpretations. Culminating with his Berlin Philharmonic debut in October 2021, highlights of Mr. Hadelich’s 2020-21 season include appearances with the Atlanta, Baltimore, Colorado, Dallas, Milwaukee, North Carolina, and Seattle symphonies; as well as the Leipzig Gewandhaus Orchestra, WDR Radio Orchestra Cologne, Philharmonia Zürich, Dresden Philharmonic, ORF Vienna Radio Symphony, Danish National Orchestra, City of Birmingham Symphony Orchestra, Finnish Radio Symphony Orchestra, BBC Scottish Orchestra, and Elbphilharmonie Orchestra Hamburg, where he was named Associate Artist starting with the 2019-20 season. He made his San Francisco Symphony debut in 2013. Mr. Hadelich is the winner of a 2016 Grammy Award in the category of Best Classical Instrumental Solo for his recording of Henri Dutilleux’s Violin Concerto, L’Arbre des songes, with the Seattle Symphony under Ludovic Morlot (Seattle Symphony MEDIA). A Warner Classics Artist, his most recent release is a double CD of the six solo sonatas and partitas of Johann Sebastian Bach. Born in Italy, the son of German parents, Augustin Hadelich is now an American citizen. He plays the 1744 "Leduc, ex-Szeryng" violin by Giuseppe Guarneri del Gesù, on loan through the Tarisio Trust. For more information visit www.augustinhadelich.com.

When Richard Strauss (1864–1949) composed his Serenade for Winds, in his native Munich in 1881, the avant-garde of German music was defined by Richard Wagner, who would unveil his final opera the following year. Wagner’s music would become a decisive influence on Strauss, but it was not yet; at this point, Strauss’s taste aligned with that of his father, a virtuoso horn player who loved the Classical tradition and resisted Wagnerism. Wind music was in the air at the Strauss home, and it is natural that the young composer should have produced this Serenade—his earliest piece to remain in the active repertoire—for a wind ensemble. Graceful, elegant, and sensitively scored, this single-movement Andante was probably inspired by Wolfgang Amadé Mozart’s Serenade for Winds (K.361). Although sharp ears might hear occasional foreshadowing of the future Strauss, the Serenade adheres to conservative norms—and is an extraordinary achievement for a high-school senior.

The British composer Daniel Kidane (b. 1986) studied at the Royal Northern College of Music (Manchester) and the Saint Petersburg Conservatory. He is a rising figure in British music, having composed a work commemorating the 400th anniversary of Shakespeare’s death for the BBC Philharmonic, one marking the 50th anniversary of Dr. Martin Luther King’s passing for the Chineke! Orchestra, and a piece for the Huddersfield Choral Society reflecting pandemic experiences. Be Still, composed in late 2020, was premiered by the Manchester Camerata and conductor Pekka Kuusisto (a San Francisco Symphony Collaborative Partner) via a video this past January. “In a year where lockdowns became a thing,” Kidane said, “the idea of time became more apparent to me as everyday markers, such as meeting with friends and family, travelling or attending concerts vanished. … As I look back at the year and attempt to fix in my mind events, they slither away from my grasp—like clouds passing by in the sky.”

Johannes Brahms (1833–97) did some of his best work during his summer vacations, which he usually spent at a bucolic getaway in the Austrian countryside. He spent the summer of 1878—the summer of the Violin Concerto—on the shore of the Wörthersee in the southern Austrian province of Carinthia. When he wrote his Second Symphony there the summer before, he remarked that beautiful melodies so littered the landscape that one merely had to scoop them up. He scooped up quite a few for his Violin Concerto, too, but early listeners weren’t so sure, and it took a few years for them to embrace it as one of the violin’s essential classics. Says Augustin Hadelich: “The Brahms concerto is in many ways an unusual violin concerto: the role of the solo violin is not that of a diva accompanied by a subservient orchestra, but rather a protagonist defining its role through dialogue, struggle, and dance with the other voices.”

Brahms did not provide a cadenza for the concerto’s opening movement. “For the first half-century after the premiere,” says Hadelich, “many great violinists from Joachim to Ysaÿe to Heifetz composed their own cadenzas, a tradition that unfortunately did not continue into our time. Writing a cadenza is a chance for a more personal reflection, and after many years of performing the Joachim and Kreisler cadenzas, I decided to write my own.”