Spotlight: Peaches and Edwin: Reunited (and it feels so good!) 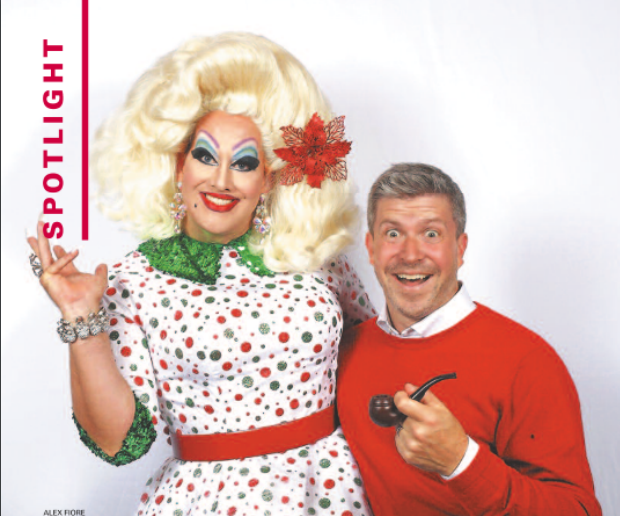 
Made your holiday plans already? You might want to add one more event to your datebook: The San Francisco Symphony’s Holiday Gaiety program (Dec 7) will be one for the ages. Holiday Gaiety features the incredible co-hosts Peaches Christ, a longtime San Francisco drag sensation, and renowned conductor Edwin Outwater. They’ll be joined by a fabulous lineup of guest stars, including actress-singer Ana Gasteyer (along with a few surprises), and of course, those world-renowned party animals, the San Francisco Symphony!

Peaches Christ got into drag while a film student at Penn State. She chose the name in part as a rebellion against a strict religious upbringing, and in part because “celebrity puns were big in drag names back then, and I wanted one with longevity!” She moved to San Francisco, perfected her act, and thanks to a host of Bay Area performances, including her long-running series of movie screenings, Midnight Mass, has become an entertainment legend. (Fun fact: she lives across the street from Davies Symphony Hall).

At first, Edwin Outwater’s resumé looks a tad more serious: He was music director of the Kitchener-Waterloo Symphony in Canada from 2007 to 2017, and has had a long association with the SFS including posts as Director of Summer Concerts, Resident Conductor, and Music Director of the San Francisco Symphony Youth Orchestra. He’s collaborated with everyone from Renée Fleming to Ben Folds but he’s definitely up for a good time during the holidays.

Peaches and Edwin also co-hosted the Symphony’s last two LGBTQ-themed holiday concerts. As Peaches recalls of the first concert in 2017, “In some ways it was a response to the state of the world then. It was a dark time, and kind of still is. We need these affirming celebrations now more than ever.”

For Edwin, these holiday programs have been “a career highlight, because they have been so wacky, but also because they embraced the LGBT community. At the same time, some of my straight married friends came and had a great time. That’s the wonderful way the culture is changing.”

Edwin is known as a highly adventurous conductor (he helmed the recent S&M2 concerts at San Francisco’s new Chase Center with the SFS and Metallica), who isn’t afraid to experiment with the concert experience. He thinks that’s why he was entrusted with Holiday Gaiety. “I believe it’s possible to be adventurous and entertaining. The challenge is to take a very different kind of experience that maybe the audience hasn’t seen on stage, and make it seem familiar.”

He admits that sometimes audiences “do freak out when the drag queens come on stage; the atmosphere is more like a rock concert. What I’ve come to appreciate is that they’re such great comedians. I’m pretty comfortable hosting and telling jokes onstage, but their devotion to comedy and executing it has definitely upped my game. I think musicians and comedians have a lot of respect for each other’s art.”

What is it about drag that attracts such a devoted following? Peaches has given the question a lot of thought. “I have no scientific evidence for this, but I think people can all relate to overcoming adversity in their lives. The power of drag for many gay men is that we’re embracing what we were once bullied for. We were ostracized and called sissies; we embarrassed our parents. There’s such a power of rebellion to have a grown man dress in drag, such energy.”

But at the same time, Peaches firmly believes that the Holiday Gaiety show “is about checking your everyday life at the door, and just having fun, laughing, and enjoying the music and comedy. There’s nothing more healing than music and laughter!”