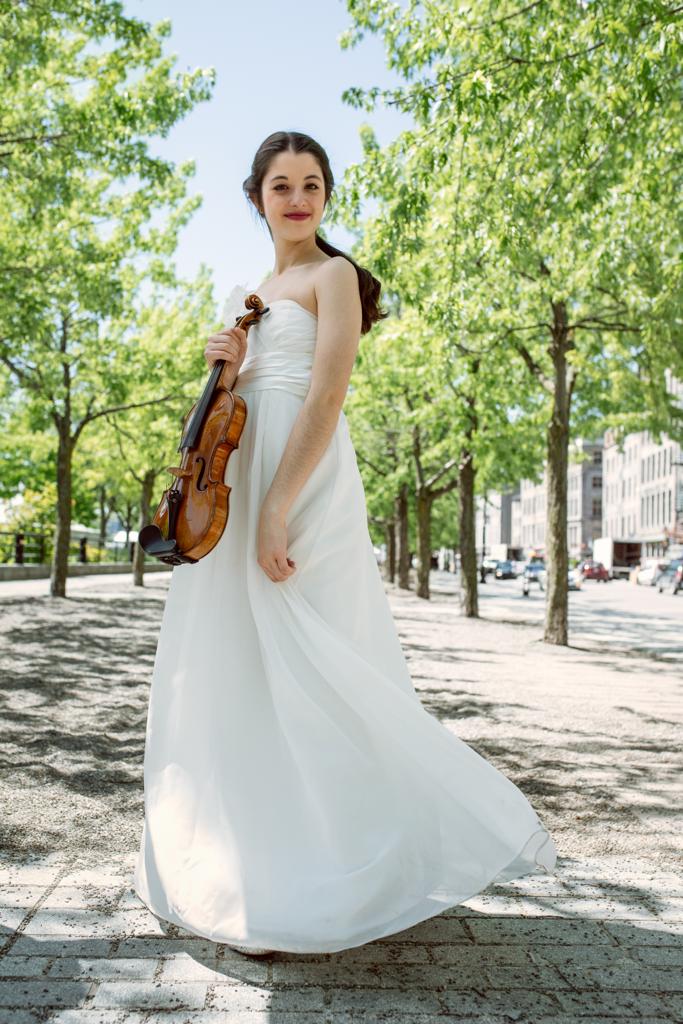 Are you excited about making your US and San Francisco Symphony debuts at these concerts?

It’s really amazing that I will be making my debut with this fantastic orchestra. The Mendelssohn is a very, very special concerto. It’s so lyrical, with many contrasting moods and much drama, but there are also playful moments to be enjoyed. I simply try to really feel each note.

When did you start playing the violin?

I remember when my mother would drive me to kindergarten in my hometown of Granada [Spain], she’d play recordings of the most famous violin concertos and pieces: Brahms, Tchaikovsky, Mozart. It would have been impossible not to fall in love with them! That was the beginning. Later, when my family took me to orchestral concerts, I became aware of all the different instruments and decided I wanted to be a violinist, so I started taking violin lessons at age six. We moved to Dresden when I was eleven years old, where I later met Marek Janowski [on the podium for María's debut next month]. He heard me play with the Deutsche Streicherphilharmonie—I was thirteen years old—in Berlin, and ever since, he has been an advisor to me. He is one of the most important pillars of my musical life, along with the conductor Vladimir Spivakov and my teacher Boris Kuschnir. The three of them have believed in me, made me who I am, and I am extremely grateful for their support!

What would you be doing if you weren't a violinist?

I can’t think of something not having to do with music. Maybe I’d be a conductor . . . I think it’s really incredible work. For now, in addition to being a violin soloist, I also really enjoy playing chamber music with my quartet. Sometimes I compose. I also find time for swimming and reading, so I try to combine all these things. Somehow it works!

There's a fantastic story behind the Mendelssohn Violin Concerto. He wrote it for Ferdinand David [a virtuoso German violinist], who is believed to have premiered it with a Guarnerius del Gesù violin that later belonged to Jascha Heifetz. Today that violin is in the collection of the Fine Arts Museums of San Francisco [and is played by SFS Concertmaster Alexander Barantschik]. As it happens, I play another Guarnerius del Gesù (the 1736 “Muntz” violin), which is generously on loan from the Nippon Foundation. To perform the Mendelssohn on this instrument in San Francisco is really a thrilling coincidence!

In the Family: Cellist Oliver Herbert

You have deep ties to the San Francisco Symphony family.

My father David Herbert was SFS Principal Timpani when I was growing up, and my mother Adrienne Sengpiehl is an active freelance violinist and teaching artist for the Symphony's Music and Mentors program. She was actually my first music teacher, before I switched to cello. My first cello teacher was Iris Pingel, wife of SFS Principal Bass Scott Pingel. My other main teacher growing up was SFS Associate Principal Cello Peter Wyrick. So it all comes back to the San Francisco Symphony!

Tell us about your time with the SFS Youth Orchestra.

I loved the experience. I made many friends, and it was pivotal to my development as a musician. Just being at Davies Symphony Hall every week on stage for our rehearsals made me think, "This is where I belong." During my years there I was also fortunate to get to perform a concerto with the YO, at Davies Symphony Hall. This was my first time playing there as a soloist, which was a dream come true for me.

Michael Tilson Thomas is conducting your September performances. What's it like, working with him?

It's a really fun experience—every time I collaborate with Michael we spend a lot of time discussing the music, and I walk away with many new inspirations and perspectives. Being in the presence of someone always thinking outside of the box, with his creative energy, is very inspiring. He's been a role model for me for as long as I can remember.

You play a 1769 Guadagnini cello. Haydn was alive then!

Yes, it's had such a life of its own. The previous owner was Antonio Janigro, the great Italian cellist. Whenever I start working on a new piece, I know this cello has already played it; the instrument knows it better than I do! It's very humbling and I'm so grateful to the Janigro family for giving me the opportunity to perform with such a great cello.

What should we know about Haydn's Second Cello Concerto?

It's much less performed than his First. That's one reason I'm so excited to play it; I think it's fresh for audiences. It's the kind of music that really tells a story. The piece is full of optimism, lightness, and generosity, but at the same time there are a lot of technical challenges under the surfaces. My goal is to make them disappear so the audience can be completely immersed in the music.

NEXT GEN AT THE SFS