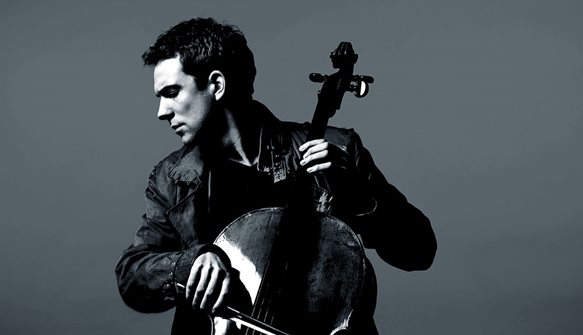 German-Canadian cellist Johannes Moser makes his SFS debut this month (Jan 24-26) in the first Symphony performances of Lutosławski's Cello Concerto. Moser is no stranger to contemporary music, having commissioned and premiered works by a number of living composers in addition to performing and recording works of the recent past. Here Moser reveals the process of working with composers and orchestras and how life experience is essential to artistic growth.

Given the jet-setting life of the modern soloist, how does cellist Johannes Moser find time to contribute to the creation of new music?

“The possibilities with new technologies are amazing. I can play something live over Skype in Europe for someone writing in America, to see if it works; that’s incredible. While as a performer I like to offer my services as a ‘cellistical guinea pig,’ I don’t want to interfere too much with the composing process. There needs to be enough trust to really let each party do what they do best, then stay in close contact and conversation, and hopefully something meaningful is born.”

Citing such composers as Andrew Norman (from whom Moser has commissioned a cello concerto, to be performed by the SFS in a future season), Thomas Adès, Anders Hillborg, Kaija Saariaho, and Jonathan Leshnoff, Moser calls this “an incredibly exciting time for new music. The phase where people were writing music to alienate the public is almost over. There was a good reason why this happened. After World War II, with all its horrors, it was as if people didn’t want to write anything beautiful. But thanks to composers in Scandinavia, and North, South, and Central America, there are so many great influences coming into new music that make it exciting and enjoyable, and people want to hear new pieces again.”

Isn’t it hard to premiere a piece? After all, it’s new to the soloist, the conductor, and the orchestra, and rehearsal time is short.

“We’re all submarines with no radar! But if the conductor and the soloist are on the same page, it radiates confidence to the orchestra. So you play through the piece, then with a fantastic orchestra like the San Francisco Symphony, their intuition kicks in, and the musicians ask, ‘OK, where’s the drama, where do we breathe?’ It’s my first time with the Orchestra, but I know they do a ton of new music, so I’m sure the process is incredibly familiar to them. I’m so thrilled to finally perform with them.”

And what can we expect to hear when Moser takes on Lutosławski's 1970 Cello Concerto with the SFS this month?

“The core of the piece is really about drama and the interaction between orchestra and soloist. Throughout, the conflict between the cello and the orchestra is so violent that the instrument is almost crushed at the end. But what is unique about this piece is that I can really tap into a very confrontational emotion, which is not something I usually carry myself as a person.”

If time permits, he’s looking forward to enjoying the Bay Area’s many recreational opportunities. While he’s given up skiing (after a friend got run over by a snowboarder), he’s still an avid hiker and mountain biker. “If my life just consisted of trying to protect myself, that would make me even more vulnerable and more prone to accident. I’m always sad when young musicians tell me they’ve given up all sports to concentrate on music. I think, ‘Why? There are so many great things that can enrich us…don’t say no to life!’

“The hiking and mountain biking help me keep things in perspective. When you’re out in nature, you realize playing one wrong note in the Dvořák Cello Concerto is not the end of the world. The mountain will still be there.”